In conjunction with World Ozone Day, Toxic-Free Future (TFF) has released the findings of their latest investigative report concerning the release of harmful “forever chemicals” out of the Daikin America facilities near Decatur, Alabama. These facilities lead the country in manufacturing a grease-resistant chemical commonly used in food packaging called PFAS (per- and polyfluoroalkyl substances). PFAS are used by companies to make their products non-stick, or resistant to stains and moisture, despite the growing evidence that these chemicals are dangerous to human health. TFF’s newest investigation sheds much-needed light on the harmful community and environmental effects of Daikin America’s chemical manufacturing.

Who is Toxic-Free Future?

Originally the Washington Toxics Coalition, Toxic-Free Future has leveraged advanced research, grassroots organizing, and consumer engagement to rid the environment of toxic chemicals for 35 years. As a science and advocacy group, TFF oversees a number of state and federal programs dedicated to a healthier tomorrow; Safer Chemicals Healthy Families lobbies for “strong federal policies that protect the public from toxic chemicals”; Mind the Store “challenges retailers to eliminate toxic chemicals and replace them with safer alternatives.” The Mind the Store program also releases an annual Retailer Report Card that scores companies on how safe they are from toxic chemicals.

PFAS are known as “forever chemicals” due to their unwillingness to break down in the environment. Additionally, PFAS are extremely mobile, able to seep deep through our soil and into local drinking water. In a peer-reviewed study conducted by Toxic-Free Future, PFAS were found in 100% of breast milk samples tested and newer PFAS are now believed to build up in people. It’s not that surprising when you take into account TFF’s 2020 report finding that some of the U.S.’s top fast-food chains, such as McDonald’s, Burger King, and Wendy’s, likely serve up toxic PFAS in the hundreds of millions of food products they serve each year.

Through a regulatory loophole in the federal government, Daikin is allowed to produce ozone-depleting substances for use in the manufacturing of PFAS. Known as chlorodifluoromethane, or HCFC-22, this pollutant damages Earth’s atmosphere in two ways. First, it depletes the atmospheric ozone layer, which shields us against the harmful solar radiation that can lead to skin cancer or cataracts. Second, HCFC-22 is a mighty greenhouse gas with a global warming potential estimated at 5,280 times that of carbon dioxide. In 2019, Daikin America reported releasing a total of 240,584 pounds of HCFC22 from its Decatur facilities, making it the #2 polluter of HCFC-22 in the U.S. As TFF puts it, Daikin’s reported releases of this greenhouse gas equates to “more than one billion pounds of carbon dioxide.” That’s about the same environmental impact as 125,000 passenger cars driving for a year.

“This is a sad but clear example of how toxic chemicals and climate change are connected: manufacturing PFAS chemicals not only pollutes people and the environment but releases potent greenhouse gases, adding to the climate crisis,” explains Erika Schreder, co-author of the investigative report and science director for Toxic-Free Future. “Exposure to PFAS is known to be toxic and dangerous, and so is the process of making them. The safest thing we can do is to stop making them, and we need action at all levels to make this happen, including from Congress, grocery and fast-food retailers, and state governments.”

The production of PFAS and HCFC-22 at Daikin America involves a number of dangerous substances including vinyl chloride (a carcinogen associated with liver disease) and another fluorinated chemical—tetrafluoroethylene (TFE). In addition to being a carcinogen, TFE is highly explosive and in 1999, a tower containing TFE exploded, killing three employees and badly burning another Daikin worker in Decatur. Just this past year, the Occupational Safety and Health Administration (OSHA) levied penalties against Daikin for alleged violations of safety management of highly hazardous chemicals and respiratory protection standards at the Decatur plant. Toxic-Free Future reports that Daikin is contesting the penalties, which come to only $40,482. 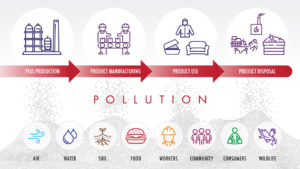 Daikin’s facilities, as well as the nearby 3M plant, have contributed to Decatur and Northern Alabama becoming one of the nation’s hotspots for PFAS contamination. It starts with Daikin’s waste discharging into Decatur’s wastewater treatment plant. From here, the treatment plant’s liquid effluent is released into the Tennessee River, the primary water source for Decatur and other North Alabama communities. Testing by federal researchers has shown that the effluent from Decatur’s treatment plant, as well as the drinking water for local residents, contained dangerous levels of PFAS. In a 2017 settlement, Daikin agreed to pay the local water authority $5 million.

Daikin’s plant also produces a PFAS-laden sludge that gets dumped into the Morgan County landfill. The liquid runoff from the sludge, called leachate, eventually finds its way back to Decatur’s wastewater treatment plant leading to yet another avenue for these toxins to enter the Tennessee River. The communities within three miles of Daikin’s facilities, primarily African American and with incomes under $50,000, struggle to preserve their drinking water from these toxic chemicals.

“Members of my community have been drinking poisoned water for decades because of plants like the local Daikin America facilities,” says Brenda Hampton, founder of Concerned Citizens of WMEL Water Authority. “And many of my neighbors are experiencing health problems that we’re concerned may be due to this toxic PFAS exposure. As a grandmother, this worries me to no end. No one’s drinking water should be poisoned to make burger wrappers.”

A Danger to Communities Across America

While PFAS have been banned in the production of certain products in a handful of states, there are no federal regulations that protect the environment and consumers from the harmful exposure of these chemicals. And it’s not just direct exposure to PFAS that can cause health problems but also indirect exposure when these toxins are introduced to a community’s air and water supplies.

Some of the PFAS manufactured at Daikin America for paper use are sent to specialty paper mills across the country. These paper mills produce the oil – and grease-resistant paper commonly found in fast-food chains and other packaging. The process for applying the PFAS to paper involves treating the specialty paper with a PFAS-concentrated pulp slurry, later which is discharged into the local wastewater, bringing along with it the toxic chemicals from Daikin.

Toxic-Free Future reports that “any mill that uses Daikin’s PFAS for paper is a potential PFAS pollution hotspot.” TFF estimates that each of these specialty paper mills, found across the U.S. from Maine to Georgia, may be releasing hundreds of pounds of PFAS into their local surface water and sludge waste each day. However, these PFAS discharges aren’t regulated by the Clean Water Act or any other pollution-related legislation, so local rivers and water treatment plants go untested and unmonitored.

Since one of the major uses for the PFAS manufactured in Daikin’s facilities is for greaseproof paper, the kind used to hold fast-food sandwiches such as McDonald’s Big Mac and Burger King’s Whopper, consumers can leverage their relationship with retailers and demand immediate action for the removal of toxic chemicals from food packaging. In the last two years, Mind the Store’s Retailer Report Card has helped 18 retailers reduce or eliminate PFAS in food packaging at more than 77,000 stores, which includes major brands like Amazon.com, Cava, Chipotle, Freshii, McDonald’s, Panera Bread, Sweetgreen, Trader Joe’s, Wendy’s, and Whole Foods Market.

“Retailers are playing an incredibly important role in moving the marketplace away from these toxic ‘forever chemicals,’” explains Mike Schade, director of TFF’s Mind the Store program. “With many thousands of pounds of PFAS in circulation due to their use in food packaging, we applaud those companies that commit to phasing out these toxins in food packaging. Both Wendy’s and McDonald’s have made this commitment earlier this year, but Burger King has failed to act. Burger King needs to step up and act immediately to protect its customers and our communities from these ‘forever chemicals.’”

TFF asks all consumers who wish to see Burger King phase out PFAS from their packaging to sign this petition urging their parent company, Restaurant Brands International, to ban toxic chemicals and stop making toxic trash.

All consumers can help fight for the removal of toxic chemicals in our environment by advocating for local and federal lawmakers to ban the use of PFAS and other “forever chemicals” in food contact materials.

“There are a number of things that families can do. One is to ask your local member of Congress to support a ban of PFAS in packaging. We’re expecting legislation to be introduced to Congress this fall by Representative Debbie Dingle (D-MI) to ban it nationally” says Erika Schreder. “We also advise families to avoid stain-protection treatments and products made with Teflon such as non-stick pans or bakeware.”

Furthermore, Toxic-Free Future urges concerned citizens to pressure the EPA to ban the production of the dangerous climate pollutant HCFC-22 while holding mega-polluters like Daikin financially responsible for the cleanup of PFAS in communities that have been affected by its manufacturing, use, and disposal. Learn more about Toxic-Free Future and how to end the use of toxic chemicals at toxicfreefuture.org.