Last week, homegrown brothers Damon and Dylan Hsu played the first game in the 2022 World Lacrosse Men’s U21 Championship Tournament, taking place in Limerick, Ireland. The Hsu brothers, both born in Washington, D.C. and current residents of Potomac, Maryland, will be playing for Team China, representing the national heritage of their grandparents.

And is the largest junior-level world championship staged to date. The tournament features 23 teams, split into five pools, and more than 500 athletes competing in 86 games over 11 days.

Lacrosse has been a lifelong journey for the brothers, and where better to cultivate those skills than in Maryland, which recognized lacrosse as the state’s official sport in 2004! The sport’s popularity has been steadily growing in the DMV following the University of Maryland’s perfect 18-0 season capped off by the NCAA championship win.

They later attended Georgetown Preparatory School in Rockville, Md., where they played on the travel and varsity teams. Damon was even senior captain of the school’s varsity team in 2020. Dylan graduated shortly after, in 2021, the same year Georgetown Prep won the Interstate Athletic Conference Championship for the first time in more than eight years.

World Lacrosse (WL), the International Olympic Committee’s governing body for international lacrosse, is active in over 75 countries across six continents.

Each year, WL holds tryouts for their various tournaments. In 2019, Damon and Dylan first tried out in Princeton, NY at Team China’s North American tryouts. They were selected for the U19 (under 19 years of age) 2020 tournament team, cinching two of the four highly coveted spots on the team made available to non-China passport holders. This was in the fall of 2019.

In early 2020, during the height of the COVID-19 pandemic, World Lacrosse rescheduled the U19 tournament for 2022, making it a U21 team instead. While this meant Damon and Dylan could still be on the team, their spots were not guaranteed. Damon, who was in his sophomore year at Lehigh University, and Dylan, a freshman at Amherst College, traveled to Long Island, NY, and tried out again in 2021. Fortunately, both brothers were, again, selected for Team China’s 22-player roster. 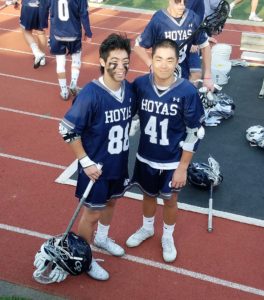 The sport of lacrosse has been rapidly growing in China, where a popular slogan from the China Lacrosse Association is “Stick Together, Aim Higher”

This has certainly proved true for Damon and Dylan, who have enjoyed getting to know their WL Men’s 2022 U21 teammates, many of whom are currently residing in the US as foreign students. In addition to the two tryouts it took to secure their spots on the team, the brothers also attended the men’s training camp, held in conjunction with the recent World Lacrosse Women’s World Championships in Towson, Md. Damon and Dylan Hsu traveled to Dublin, Ireland at the end of July for more training before Team China’s first game in the tournament began on Thursday, August 11.

Wish these local brothers some luck!

Give Sports a Chance: 10 Lessons Kids Can Learn

Staying Healthy in the DMV