Acceptance of Children who Stutter

Today, Washington, D.C. native Taro Alexander is a happily married father of three who has successfully founded and managed SAY: The Stuttering Association for the Young in New York and D.C. for many years. As an adult, he knows how to handle his stuttering and can successfully relate to children with this speech disorder. His bottom-line message is simple, yet potent: accept children who stutter.

When he was 5 years old, Alexander began to stutter by slightly delaying his speech and working hard to say words consecutively. As a young child, he didn’t know how to handle what was happening with the way he talked. His emotions overtook him and he spent “years [with] isolation, shame and crying myself to sleep at night.” Though he “had a wonderful, loving supportive family and great friends, growing up was a lonely, isolating experience,” explains Alexander. It would take him years to learn the most valuable lesson of all: acceptance of himself and others despite their stuttering.

As Alexander got older, he continued his schooling hindered by his stuttering. He spent years “watching the world from the sidelines, desperately wanting to throw myself into the game, but allowing fear to win out more times than not.” After spending some time in New York, Alexander’s life changed radically at age 26 when he met a fellow stutterer. He also discovered the stuttering community and was amazed to learn that there are 70 million people worldwide who stutter. For the first time in his life, Alexander did not feel alone. He felt embraced and accepted in the community despite his stuttering.

Alexander’s nearly lifelong stuttering gave him the compassion and tools to found the nonprofit SAY and reach out to help children ages 5-18 in New York and at a satellite office at Dupont Circle in Washington, D.C. As he explains, SAY “offers free programming for young people who stutter to improve their confidence, build communications skill, make friends, and have an awesome time.” Enamored with the arts and deeply influenced by his father’s connection with the theater in Washington, D.C., Alexander incorporated the performing arts into SAY as a creative outlet to help children with their stuttering.

Children who stutter are okay as they are

Alexander recognizes children may experience psychological effects from this speech disorder. When describing the potential ways stuttering might impact a child psychologically, Alexander chooses his words carefully to avoid placing additional limitations or burdens on the child. “The effects can be (but not for everyone) devastating for children,” he says. As children experience language development, they may be excited to speak, but the words feel stuck. When parents witness when a child tries to speak and has difficulties uttering the speech, they go into panic mode and get confused or concerned.

Outside of the home, reactions from schoolchildren and even teachers can unfold in many different ways. Children who stutter may be barraged with difficult questions. “What’s wrong with you?” “Why are you different?” “Why do you talk that way?” According to Alexander, unfortunately, many teachers get in on the action and openly laugh at children who stutter. Alexander’s mission with SAY is to help children who stutter realize they are okay as they are.

Alexander believes the social impacts of stuttering on children can be even more damaging than the psychological ones. To illustrate this, he discussed the real-life example of what a child who stutters might endure by doing something as innocent as ordering at a fast-food restaurant such as Chipotle. At Chipotle, the customer has many options to choose from and must place their order individually at the register. Children who stutter would have to be in line, wait their turn and speak out their order. This situation has the potential of embarrassing children, especially if restaurant staff want to finish the child’s sentences or say things rapid-fire.

“Our society goes quickly. Everybody expects fast and efficient communications,” explains Alexander. He is politely adamant about making sure children are accepted despite their stuttering. To accomplish acceptance, he says public education is essential. Those who do not stutter need to receive clear instruction to be patient and accommodating when talking with those who stutter. The problem is “not giving people the time to speak and stutter. We know what we want to say but we stutter. Communications will be fine with patience.”

Every person who stutters feels different physical effects of stuttering. Some children may experience things similar to the way Alexander feels, a tightness in the chest as if a person is pressing down, making it difficult to catch one’s breath.

Whether children experience psychological, social or physical effects of stuttering, perhaps the strongest way to lessen the effects of anything negative is by “finding a support group of other people who stutter,” he explains. By being around others who stutter, children will know “they’re not weird and are part of a 70-million-member club.” Having a support system is an important component of helping children manage any negativism of stuttering, which represents the first aspect of self-acceptance. 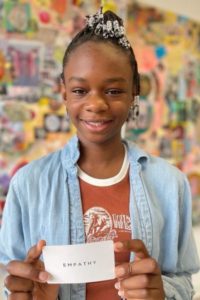 Alexander encourages parents of children who stutter to avail themselves of the support system and arts-based programming of SAY in order to help their children reach the goal of acceptance. For more information about SAY programming in D.C., visit: say.org/dc.

5 Tools to Improve Focus for Teens with ADHD

Could Your Child’s Reading Difficulty be Dyslexia?

Challenges and Benefits of Having a Sibling With Disabilities